Who knew that when beautiful Tana went off to DogWatch UK she´d become such a superstar!

When Tana was adopted in 2016 she was eight months old, and she had never lived in a house, having been born in the PAWS-PATAS shelter. She had separation anxiety and was nervous of people especially those that came to the house that she didn't know.

We did everything we could to assure and encourage her to trust people and 2 years later we realised  she had a special gift of calming people when they were stressed or unhappy.

One night while I was walking her two lovely ladies sat outside a pub local to us suggested I contacted Therapy Dogs Nationwide, a charity that assessed dogs for their suitability as therapy dogs. Here we are now in 2022 she is a fully assessed and accredited therapy dog and has started her assignments visiting various establishments including universities, offices & support centres for people with disabilities.

Tana loves visiting anywhere we go where she will be stroked, cuddled and given lots of attention. As soon as I put on her uniform, which is a bright yellow coat, a collar and a lead bearing the words therapy dog, she expects people to pay her attention and stroke her. She never fails to win people over even those who arrive anxious about being in a dog’s company and in at least two recent cases really scared. Both of those people left declaring that they had had a wonderful experience and were less fearful of dogs, especially those as big as Tana. Hopefully we can continue visiting as many places as possible and if any of you have a calm gentle dog I would encourage you to look at joining Therapy Dogs Nationwide. 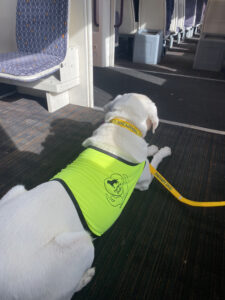 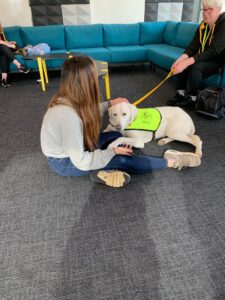 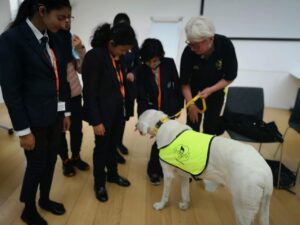