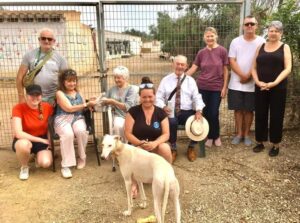 Shoestring Productions founder, Octogenarian James Dale-Grey who is about to reach the delightful age of 87 has managed to “Do It Again” with his fourth production of the Hotel La Resistance trilogy!
For those familiar with these farcical comedies, there is no place for members of the PC brigade or people willing to take offence. The plots are totally bonkers and performed by eccentric thespians who want to make you laugh, snigger and titter and help you put the woes of the world on the “back burner” for a while. And the recent 4 shows of At It Again performed at The Puntazo Hotel in Mojácar did just that and more!
Jim and the cast not only aim to entertain local folk but are also passionate about raising much needed funds for the local animal charity PAWS-PATAS which they have done for the past 5 years. PAWS-PATAS receives no statutory funding and relies entirely on the generosity of people’s donations. Not only did the recent performances raise much laughter, acclaim, applause and even a standing ovation but Shoestring are proud to donate a mighty €1200 from nightly raffles and percentage of ticket sales.
Receiving the welcomed cash from Shoestring Productions Treasurer Sue Osman, Janet Franklin (currently Treasurer PAWS-PATAS) who has been involved with the animal charity for 33 years said “apart from having to care for so many cats and dogs, we are in dire need of money for so much shelter reparation. At the tip of the iceberg we need to completely renew the electric and sewage systems plus we need new fencing and urgently build a new cat quarantine unit. It’s a constant battle to “keep the wheels turning, so on behalf of the Executive Committee and all our hard working volunteers, we are extremely grateful to receive this incredible amount of money”.
Don’t worry if you have missed the last plot, Jim is already at the “starting block” and his incredible imagination is already scribbling down the next episode. For further information visit Shoestring Productions on Facebook