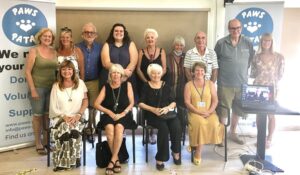 With COVID restrictions, it has been 19 months since PAWS-PATAS has held an AGM. This was recently resolved when President, Vicky Hall addressed the members with an update of activities regarding the PAWS-PATAS Animal Charity, which was established 33 years ago.

Extensive thanks was given to all supporters and volunteers; especially those who individually raised money whilst public fund raising events were banned. Christine Logan walked a million steps in 48 days, Kevin Rowe ran a full 42.2 kms marathon on his roof terrace. Ann and Brad Swift constantly auctioned various items on their Mojácar Forum and John Sutcliffe shaved his long locks off!

Vicky explained “that the biggest challenge has been lack of local volunteers and the increased number of animals abandoned at the gates. Both continuing issues which must be concentrated on and how they can be addressed.

Vicky thanked the Executive Committee for supporting her presidential role. “It has been a challenge to say the least” said Vicky “but one thing I have learnt is that I cannot give the role the time and dedication it deserves, as well as remain an active volunteer with the cat team and my heart belongs with the cats. So, I will be stepping down from the committee with effect from today”.

Both Treasury and Accounting reports were given plus an update on the TNR (Trapping, Neutering, Returning) campaign plus homing in the Netherlands before the election of President, Vice President, Secretary and Vocale were Elected. Finally, Vicky acknowledged the loss of dedicated supporters - Ric Polansky, Stuart Grice, Ann Stevens, Jonathan Allwood and Jim Franklin.

New President, Christine Knox proclaimed that during her 4 year term she would “make the shelter one of the best in Spain and work alongside all areas of the charity in order to understand and improve the many difficulties and frustrations the volunteers had to deal with”